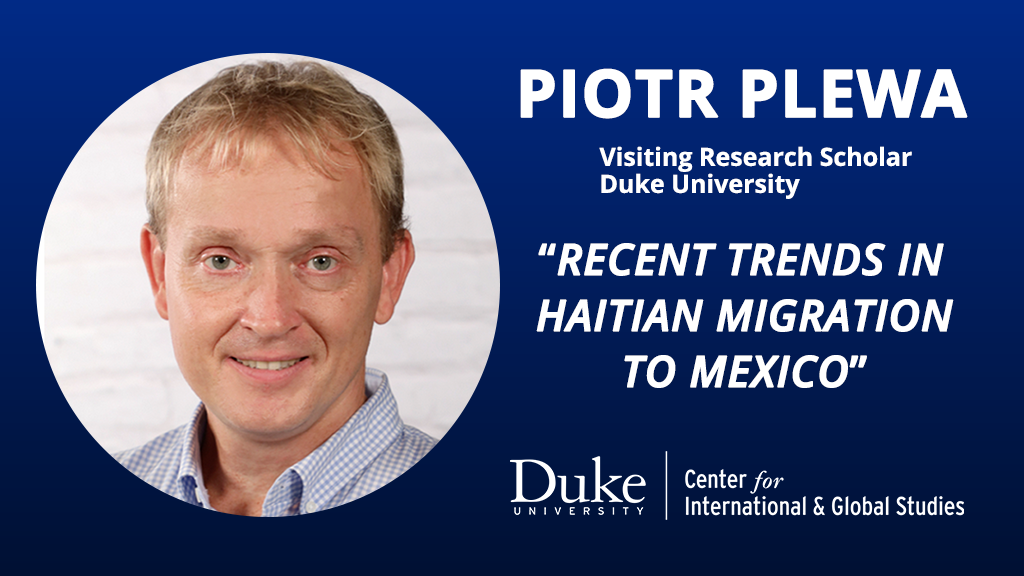 Mexico remains the country of emigration due to many more Mexicans leaving it than foreigners coming in, but it has recently became an important transit country with an increasing number of migrants and refugees settling in.

By 2021, more Haitians sought asylum in Mexico than Hondurans, despite clear predomination of Hondurans for the past decade.

Applications for refugee status in Mexico skyrocketed over the past decade, dropping only in 2020, due to COVID 19 – related border closures, and climbing steeply since then (figure 1). Hondurans, Salvadorians and to a lesser extent Guatemalans fueled the growth of asylum claims in Mexico since 2013. The number of Haitians seeking protection in Mexico grew from less than one percent of all applicants in 2013 to 39 percent in 2021. As a result, in 2021, more Haitians sought asylum in Mexico than Hondurans, despite clear predomination of Hondurans for the past decade (figure 2). 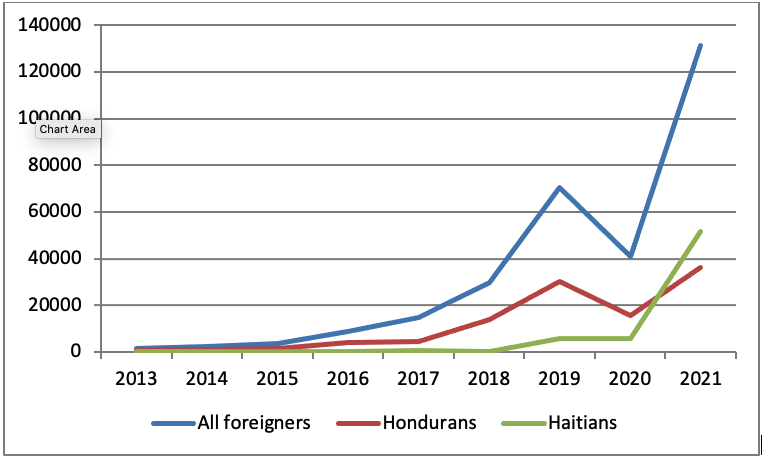 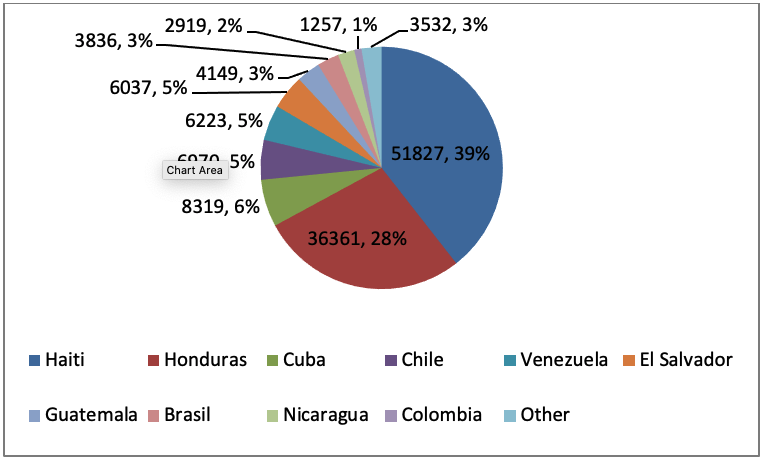 Mexico’s policies towards asylum seekers have been considered innovative for the region (Schmidtke and Escobedo, 2021). However, Haitian migration posed a challenge due to heightened numbers of applicants, and complexity of their cases.  COVID-19 compounded asylum processing and the ability of migrants to fend for themselves despite the right to seek employment immediately.

Foreigners seeking refuge in Mexico should contact Comisión Mexicana de Ayuda a los Refugiados (COMAR) within thirty days from entering the country.  Entering Mexico predominantly by land, Haitians have been filing for asylum in the southern town of Tapachula, Chiapas.

Applications should be reviewed in 55 business days. However, both the high number of applications and the complexity of individual migration stories have extended processing.

Those with pending refugee application cannot be repatriated and can seek employment by application for a visitor permit for humanitarian reasons. However, to ensure that they are available for an interview, they cannot leave the state where they filed an application.

Extended case review coupled with mobility restrictions led to a disproportional accumulation of asylum seekers in Tapachula. In the fall of 2021, Tapachula – the city of 353 000 – swelled by 10 000 asylum seekers. An estimated 3000 of them came from Haiti. Most asylum seekers were sheltered in the city’s largest stadium. In order to streamline application processing, ensure public health and dissipate tensions, Mexican authorities began to bus Haitians to other parts of the country.

In 2021, Haitians were granted most (11 843, 27 percent) of all visiting permits for humanitarian reasons surpassing Hondurans (10 830, 26 percent). Nearly three-fourth (73 percent) of Haitians applied for this permit awaiting their refugee application (figure 3). Nearly half (46 percent) of these permits were granted in Chiapas, followed by Baja California (8 percent), where most Haitians in Mexico reside. (As of January 2022, the data was available till November). 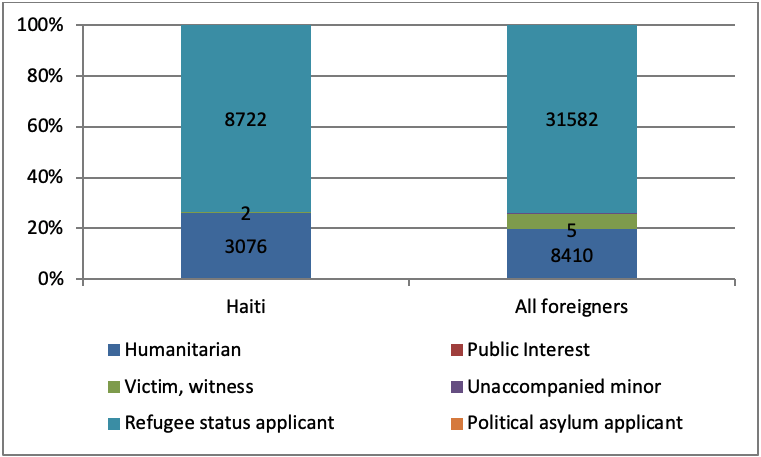 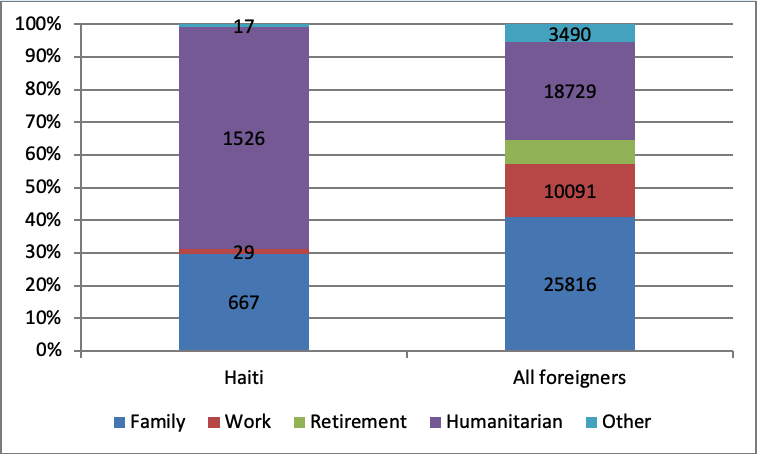 Figure 4, Permanent residence permits among Haitians and all foreigners in Mexico, 2021. Source: Author, based on UPMRIP 2022, table 2.4.2

However, one in three Haitian asylum seekers did not obtain refugee or complementary protection status.

Even though Haitian asylum applications increased significantly, their acceptance remained low.  Between 2013 and 2021, only 39 percent of Haitian applicants were granted either refugee or complementary protection status. This protection rate was lower than that of any other top country of origin, notably Venezuela. Ninety eight percent of Venezuelans in Mexico were granted refugee status in the same period (figure 5). 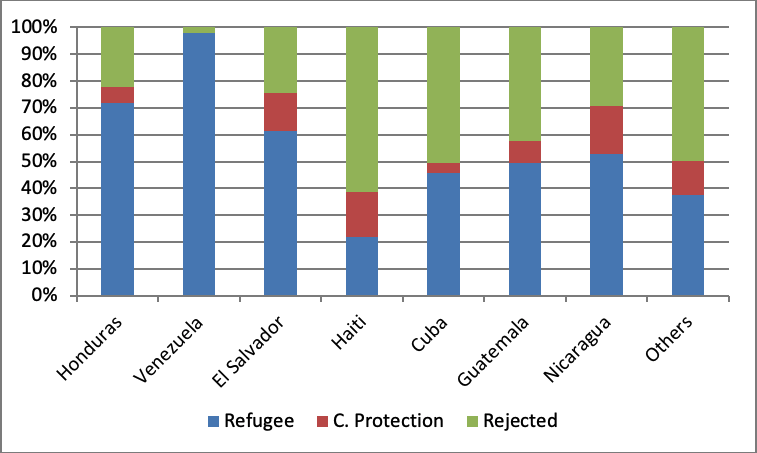 Figure 5, Refugee and protected status recognition rate among the top 7 countries of origin, 2013-2021. Source: Author, based on COMAR, 2022 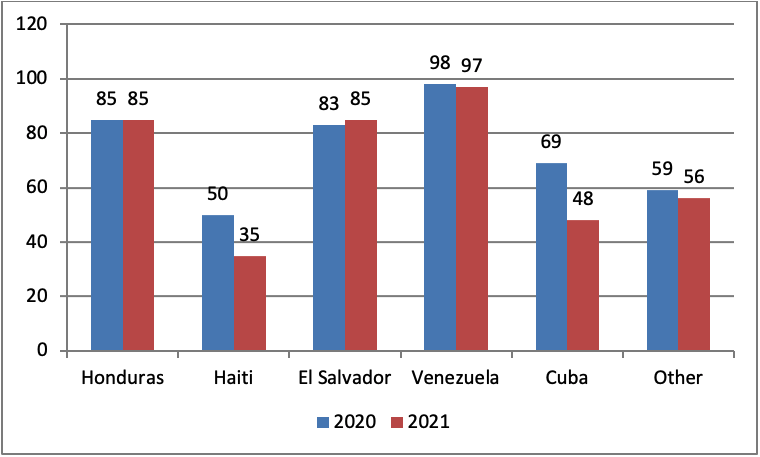 Figure 6, Refugee and protected status recognition rate among the top 5 countries of origin, 2021 (%). Source: Author, based on COMAR, 2022

While both Venezuela and Haiti have been affected by humanitarian crisis, migration trajectories of the two nationalities have been different thereby making it more difficult for Haitians to meet protection criteria than any other top nationality in Mexico.

Many Haitians came to Mexico from largely safe countries in South America rather than directly from unsafe Haiti. Their migration was mobilized by a combination of economic decline in South America, and the perception of the “window of opportunity” to migrate to the U.S. “now or never”.  The presence of Haitians originating from theoretically safe countries of last residence made processing of all Haitian applications more complex since it was necessary to distinguish between those qualifying for protection in Mexico and genuinely interested in taking it, from those  not qualifying for protection in Mexico and more interested in migrating to the U.S.

Refugees are people who have been forced to flee their country of origin due to war, violence and persecution, and who seek protection in another country.

In Mexico, the Law on Refugees, Complementary Protection and Political Asylum defines refugees as persons who:

While the vast majority of migrants from other Latin American countries arrive in Mexico without prolonged residence in another, safe country, many Haitians seeking protection in Mexico had left Haiti several years ago to reside in Brazil and Chile prior to arrival in Mexico (Yates, 2021). Furthermore, many Haitians have been hoping to ultimately seek protection in the United States.

Haitians in South America decided to migrate to the U.S. when COVID-19 deteriorated employment opportunities, made it difficult for many to renew of their legal residence (in those cases when it depended on job offer), and precipitated anti-immigrant sentiments (Harrison – Cripps, 2021). While all these unfortunate events made their stay in e.g. Chile or Brazil precarious, they did not necessarily created the conditions meeting refugee or complementary status protection criteria.

Furthermore, many Haitians understood President Biden’s plans to reform U.S. migration policies, including temporary suspension of involvement of Mexico in stemming migration to the US, as a window of opportunity to cross into the US “now or never”. “Remain in Mexico” policy required U.S. asylum seekers to remain in Mexico until their U.S. immigration court date. In February 2021, Joe Biden’s administration suspended the policy but in late August 2021, the U.S. Supreme Court ordered its resumption, which the U.S. did in December, 2021. Additionally, the U.S. Department of Homeland

Security extended permission to apply for Temporary Protected Status to Haitian nationals living inside the U.S. as of July 29.

It is in this period of uncertainty about the future of migration to the U.S. that the largest wave of migrants, predominantly Haitians, arrived in Mexico with the intention of crossing into the U.S. rather than settlement in Mexico (figure 7). By September 2021 an estimated 10 000 Haitians congregated in Ciudad Acuña, Coahuila across Río Grande from Del Río, Texas. Some of those who managed to wade across the river to the US were deported to Haiti, others were given a chance to appear before U.S. immigration judge, and yet others were returned to Mexico. 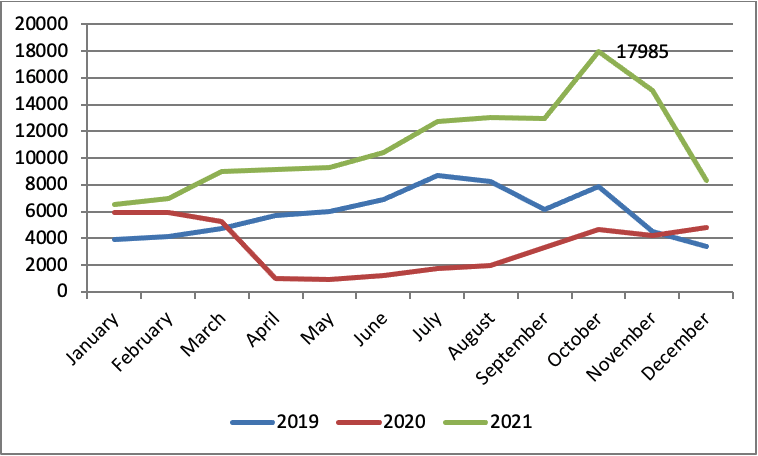 By October, migrant camp in Ciudad Acuña was cleared, and Mexico registered its highest ever number of refugee applicants among whom Haitians were most numerous. While not as appealing as life in the U.S., asylum in Mexico was safer alternative than repatriation to Haiti, even though Haitians remained divided and uncertain on whether they would want to settle in Mexico or continue their efforts to reach the U.S.  Mexico and Haiti have had a migration agreement since 2004, but it was not until 2021 that significant numbers of Haitians were sent home (figure 8). 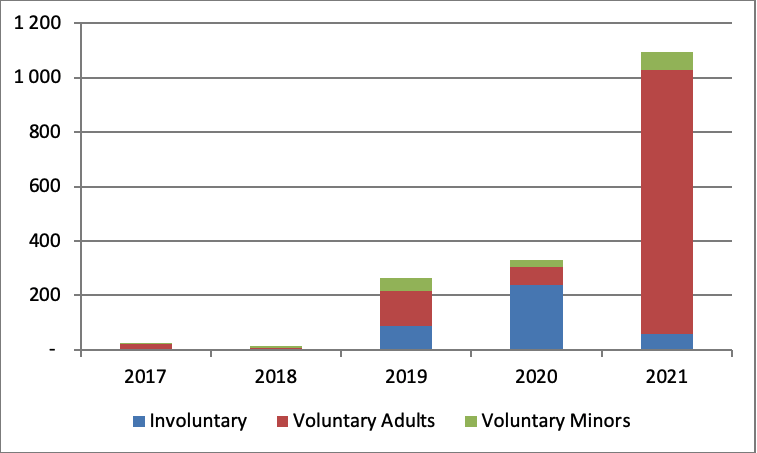 While some Haitians did succeed in obtaining hearing in front of US migration judge and others were able to stay in Mexico based either on protection status or family reunification, small numbers were also repatriated to Haiti.

In 2021, Haitians ranked fifth among those repatriated from Mexico, after Hondurans, Guatemalans, Salvadorans and Cubans. Among the 68 minors returned in 2021, 50 were younger than 11 years old and 5 were unaccompanied (UPMRIP, 2022).  Most Haitians were repatriated from Mexico through what was classified as voluntary return, even though their consented to return must be viewed in the context of lack of other alternatives to those who did not qualify for protected status.

Despite the low recognition rate, the high absolute number of applicants made Haiti the country with the fifth largest number of citizens granted refugee or protected status in Mexico, after the citizens of Honduras (43 percent), Venezuela (23 percent), El Salvador (17 percent) and Cuba (5 percent) (figure 9). 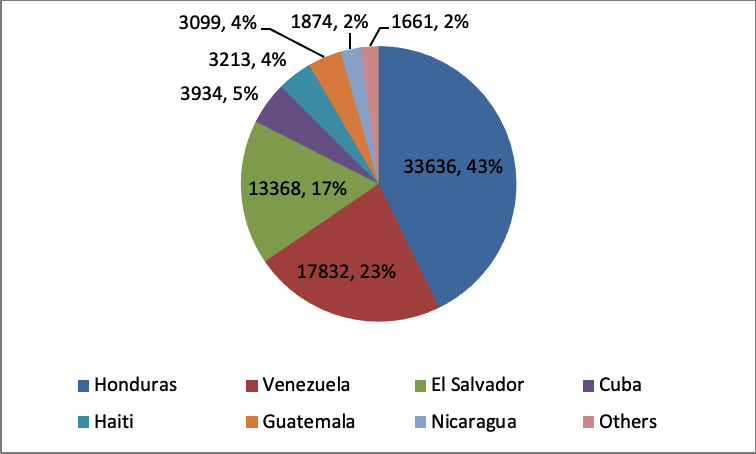 Like any other nationality, Haitians may come to Mexico for other reasons than to seek protection. They can come to work, to study, to retire or to reunify with family. In those cases, they may apply for temporary permit from outside of Mexico.  However, relatively few pursued this option, even though it would be more appropriate for those with previous residence in Brazil or Chile. While the economic decline in South America may have deprived Haitians of jobs, it did not make them eligible for refugee or complementary protection status. Refugees are people who have been forced to flee their country of origin due to war, violence and persecution, and who seek protection in another country. Many Haitians who resided in Brazil and Chile could not meet this criteria due to largely safe conditions in these two countries (as opposed to Haiti). 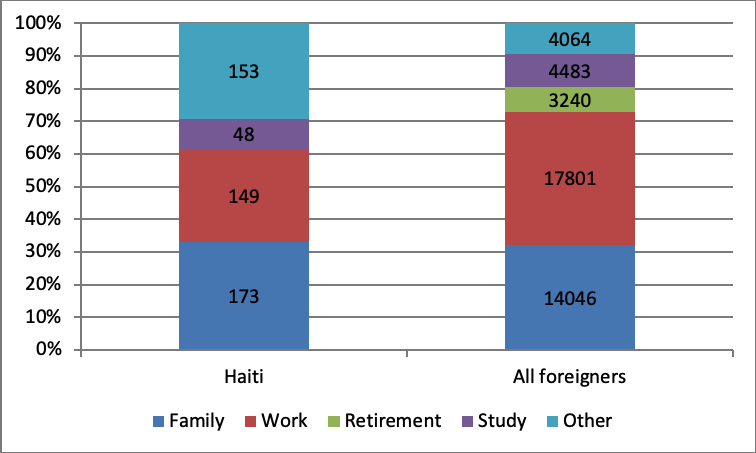 Figure 10: Temporary residence permits among Haitians and all foreigners in Mexico, 2021. Source: Author, based on UPMRIP 2022, table 2.2.2

Nearly all Haitians took perilous journey to reach Mexico.  There is a need for further solidarity between the countries of origin, transit and destination in obviating the need for this long, arduous migration.

Haitian migration has been a part of a growing Caribbean, African and Asian migration to the U.S. via Mexico and to Mexico itself. Passing through most South American and all Central American countries, this-so called “extra-continental migration” calls for Pan-American solidarity in managing migration, sharing best practices and intelligence. As of 2021, each of the countries on the route had different approaches and commitments to managing migration and assisting migrants over the course of their perilous journey.  Since each of them have also had different human resources, staff training and budgets, international funding and capacity-development would be helpful to bring all affected countries closer together in implementing migration management policies in practice. In the times of disinformation it is also important for the members of civil society to raise awareness of the would-be migrants and refugees about the chances of succeeding in whatever migratory aspirations they have.

Yates, C. (2021), “Haitian Migration through the Americas: A Decade in the Making”. Migration Policy Institute.