In a Wednesdays at the Center virtual event, four scholars discussed the work and legacy of acclaimed Mexican printmaker Sergio Sánchez Santamaría. The talk, titled “Graphic in Transit,” celebrated the release of a book by the name, which presents texts produced by art critics, collectors, and fellow artists introducing the American audience the work of Sánchez Santamaría.

Sánchez Santamaría is the heir of the famous Taller de Gráfica Popular, a powerful collective of visual artists that for decades produced art in socially and politically engaged ways in Mexico and that became known worldwide for their commitment to justice, social equality, and human rights. Today, Sánchez Santamaría uses his art to apply those ideals to the modern context, bridging Mexico’s rich artistic history to today’s complex social and political environment. 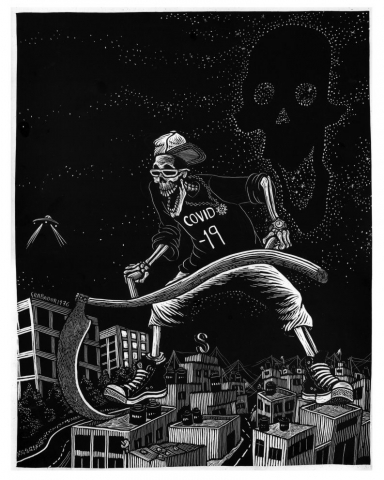 During his time in residence at Duke, Sánchez Santamaría worked closely with Fick, also a printmaker. Working in Fick’s studio, Sánchez Santamaría produced pieces directly related to social issues in the Durham area, including one in response to a then-student at the Durham School of the Arts who was facing deportation.

“What I really love about Sergio’s work is the way that he uses the traditions of Mexican printmakers—he takes the traditions and he’s updating it and incorporating modern iconography and elements,” Fick said. “He takes tradition but makes it very, very contemporary and addresses so many issues that are important to our world.”

Additionally, Sánchez Santamaría’s time at Duke opened the door to creating the book, which was published by Artist Studio Project Publishing, a Durham-based publishing house. “The academic setting and prestige of that visit helped open the door for the collaborators to work on this volume,” Rojas-Sotelo told DukeArts in an interview on the piece.

Graphic in Transit is now available for purchase online. The first 100 people to purchase the first edition receive a signed print by Sánchez Santamaría.

This event was cosponsored by the Duke University Center for International and Global Studies, the John Hope Franklin Center, the Duke Center for Latin American and Caribbean Studies, Duke Arts, and the Department of Art, Art History, and Visual Arts.

Graphic in Transit: Socially Engaged Art in The Era of Black Lives. With Sergio Sánchez Santamaría