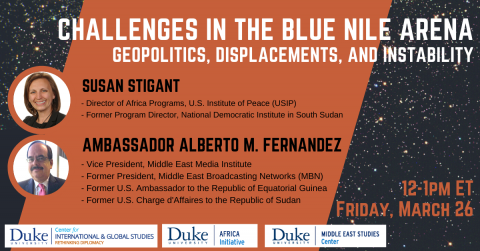 As part of its Water Diplomacy series, the DUCIGS/Rethinking Diplomacy program hosted a panel discussion on the geopolitics of the Blue Nile area, global implications of the IDP crisis and possible directions of U.S. policies for the Blue Nile Arena.

Stigant presented findings from the U.S. Institute of Peace’s recently published Final Report and Recommendations of the Senior Study Group on Peace and Security in the Red Sea Arena, which was created to provide recommendations on how to best defend and advance United States interests in the region.

The report notes that in recent years, the geopolitical dynamics of the Horn of Africa have become tied to the Middle East and broader Indian Ocean in a manner unprecedented in the last century. Stigant emphasized that American strategy in the region needs to be acutely sensitive to these shifts, stating “there needs to be a political strategy that acknowledges this geopolitical change.”

Additionally, Stigant stressed that the American approach in the region should involve work across different bureaucracies. “The United States needs to align its assistance so that the driving force of accountable governance is supported by security, development, and humanitarian assistance,” she said.

Ambassador Fernandez emphasized that while the current climate in the region is extremely precarious, the United States has a unique role to be able to assist in de-escalation. “As dire as the situation is, as menacing as it is, it could get so much worse. There’s a real opportunity to really walk this all back to a situation that doesn’t explode into all-out war,” he said.

This event was organized by the DUCIGS/Rethinking Diplomacy Program, with support from Duke Africa Initiative and Duke University Middle East Studies Center.