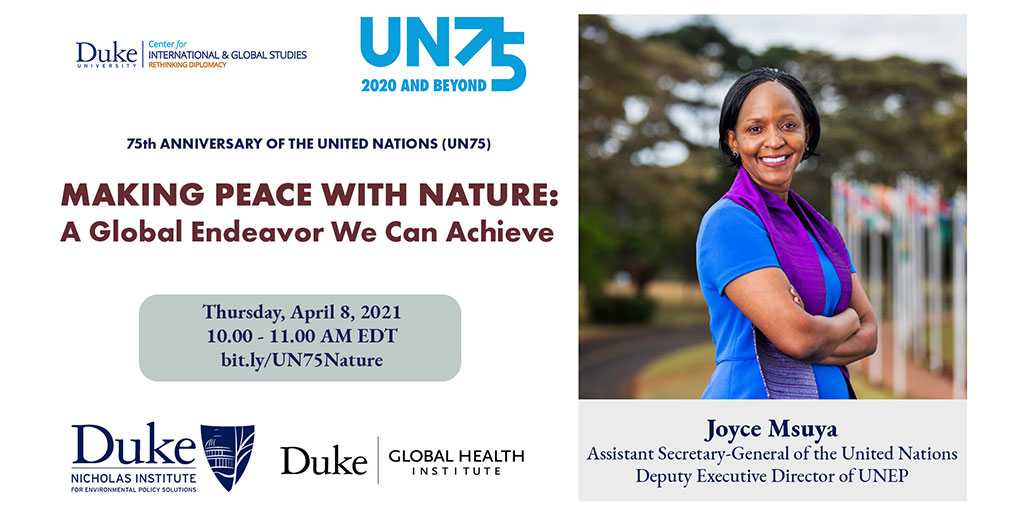 On the occasion of the 75th anniversary of the United Nations last year, the United Nations launched a global consultation that included a survey responded by 1.5 million people from 193 countries. Within the framework of Duke Center for International and Global Studies (DUCIGS)’ Rethinking Diplomacy Program, the UN75 Webinar Series is dedicated to exploring the most relevant issues highlighted by the UN75 Global consultation report.  On the introductory event, on January 28, the UN team responsible for the initiative presented the rationale and the meticulous process behind such an unprecedented project.

On April 8, the second UN75 event welcomed Ms. Joyce Msuya, Deputy Director of the UN Environment Programme (UNEP) and UN Assistant Secretary-General, for a dialogue with the Duke community on the highest long-term priorities identified by the UN75 Report Climate Change and Environmental Issues.

The conversation, moderated by Dr. Elizabeth Losos and Dr. William Pan from Duke University, was an opportunity to reflect on the role of environmental diplomacy in tackling a rather complex agenda in an increasingly uncertain future. Examining the means available for the implementation of the environmental agenda and in particular the agency’s ambitious plans, it is evident that this year’s multiple activities constitute a litmus test for UNEP's global leadership role as it celebrates its 50th anniversary in 2022.

With the underpinning of the return of the United States to the Climate Paris Agreement and the COP26 in Glasgow next November, this year (2021) proves to be a critical one for the multilateral environmental agenda. The historic set of international events1 planned this year will be an opportunity to bring a sense of urgency to this issues so well-articulated in the blueprint report Making Peace with Nature, released ahead of the fifth United Nations Environment Assembly (UNEA-5)  on 18 February, 2021. This scientific synthesis report is a comprehensive recounting of environmental challenges and courses of action regarding the triple intertwined planetary emergencies of climate, biodiversity loss and pollution.

The discussion pointed out future scenarios. Amid the COVID-19 crisis, for example, the concept of “build back better” – initially introduced in 2015 by the UN through the Sendai Framework – is now widely advocated as an opportunity for countries around the world to transform our relationship with nature while recovering from the COVID-19 health and socio-economic crises. Yet, there are great disparities in the capacity of countries to respond: to date, it is almost exclusively High-Income Countries that are investing in “green recovery” measures that aim to build back better. Middle- and Low-Income Countries are struggling to simply contain the health crisis and rescue their economies (rather than invest in sustainable and resilient growth and recovery.)

Besides, the role of academic and research institutions was also analyzed. Academia and research institutions produce a significant amount of research and tools aimed at improving the implementation of the global environmental agenda, but there is often a large gap between such research and policy implementation. Therefore, ahead of the webinar, a group of Duke faculty and students met with UNEP officials led by Ms. Msuya to discussed about potential areas of collaboration and partnerships on three main issues in which Duke is a known authoritative actor: Artisanal Scale Gold Mining and Mercury (ASGM),  Sustainable Infrastructure, and Student Experimental Learning. It was acknowledged the active engagement of Duke faculty and students in three consecutive meetings of the States Parties of the Minamata Convention on Mercury (COP2, COP3, and ongoing planning of the COP4), and their advisory engagement with national parties on the design of research agendas and policy decisions regarding mercury contamination associated with ASGM.

Taking the title from the UNEP’s report Making Peace with Nature, this webinar was an opportunity to reflect on:

- Earth’s triple environmental emergencies: climate change, biodiversity loss, and pollution which are interconnected crises related to unsustainable production and consumption, putting at risk not only the well-being but also the existence of current and future generations.

- The universal character of the crises makes this challenge everyone’s business, requiring coordinated action by governments, businesses, and people around the world in order to prevent and reverse the worst impacts of environmental decline by transforming key systems including energy, water, and food, and outline a path towards a more sustainable use of land and oceans.

- This is an urgent social and economic transformation at the level of global systems and in that way, it intrinsically links to the Sustainable Development Goals.

In sum, the webinar followed the spirit of the report as “a bedrock for hope,” in the words of the UN Secretary General, and towards an ontological shift for humankind to restore the earth‘s capacity to sustain human well-being: from transforming nature to transforming humankind’s relationship with nature.

This event was organized and hosted by DUCIGS, in partnership with the Nicholas Institute for Environmental Policy Solutions (NIEPS) and the Duke Global Health Institute (DGHI).