With UN75 Celebrations Over, Now It's Time to Tackle the Global Challenges 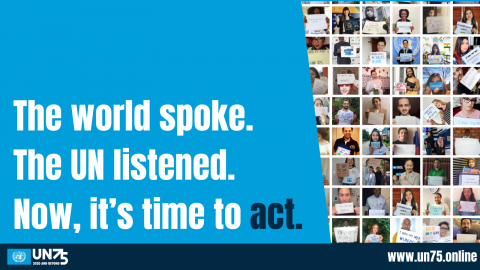 "Together we can learn from peoples across the world how we can improve in tackling the global challenges of our time." (Secretary-General António Guterres).

Dr. Cecilia Cannon, Researcher at the Graduate Institute's Global Governance Centre and Academic Adviser to the United Nations for its 75th anniversary, joined DUCIGS Director Giovanni Zanalda and DUCIGS Rethinking Diplomacy Fellows Christian Lara and former Ambassador Robert Pearson for a conversation on the outcomes of the United Nations’ landmark UN75 initiative, as well as the context in which the initiative was conceived and the repercussions it will have on the work of the United Nations as it nears its 100th anniversary in 2045.

Marking its 75th anniversary in January 2020, the UN launched a global consultation with the aim of informing its priorities and gathering ideas on what is needed to address emerging global risks and opportunities, as well as the role of the UN within the multilateral system of the future. This unprecedented initiative reached over a billion people through events, online concerts, and games, and received formal input from over 1.5 million people in over 195 countries through surveys and open dialogues. “In its anniversary, more than a celebratory moment, the United Nations wanted to create a global platform for listening from ‘we the peoples’ and our aspirations, anxieties and expectations,” Lara explained.

In her talk, Dr. Cannon provided broad overviews of the biggest trends that were identified in the data, including, in the short-term, wide global support for universal access to healthcare, increased support to the nations hit hardest by COVID-19, and investment in education and youth programs. Additionally, while secondary priorities for both short- and long-term goals tended to vary regionally, respondents in all regions identified climate change and environmental issues as the top long-term global challenge. “There's a lot of commonality in terms of people's short-term priorities --access to basic services-- and long-term priorities --climate and the environment. When you go down to people’s, second, third, fourth priorities, that's where we did see some differences at the regional level,” Cannon said.

The findings collected by the UN75 Initiative were recently published in a report titled, “Shaping Our Future Together: Listening to People’s Priorities for the Future and Their Ideas for Action”.  DUCIGS new series, which was spearheaded by Christian Lara, has used the findings included in this report to identify three priority areas which will serve as the topics for the upcoming webinars: Investing in Health for an Equitable Future, The Climate Crisis–A Race We Can Win, and The Impact of Digital Technologies. The upcoming webinars will be held throughout the spring semester.

The DUCIGS/Rethinking Diplomacy Program is supported by a grant from the Josiah Charles Trent Memorial Foundation Endowment Fund. This first event was co-sponsored by POLIS: Center for Politics and the Duke International House (IHouse).

Excerpts of the webinar:

ON THE DECISION TO IMPLEMENT THE UN75 INITIATIVE

Dr. Cecilia Cannon, Researcher at the Graduate Institute's Global Governance Centre and Academic Adviser to the United Nations for its 75th Anniversary

“We all saw that the global challenges we were facing, even before COVID-19, were mounting and we were nowhere near on track to solving them. So, the Secretary-General, as well as member states of the United Nations, all agreed that it’s not really a year for celebrations. Instead, what the Secretary-General did was launch this global conversation to really take the temperature and take stock as to where we’re at with the global challenges we’re facing and where we’re at with multilateralism and the global institutions that are in place to address global challenges.”

ON THE IMPACT OF COVID-19 ON GLOBAL DEVELOPMENT

ON THE GLOBAL CONCERN FOR COVID-19 OVERSHADOWING CLIMATE ISSUES

“Particularly among youth, there is a real concern that attention is going to be shifted away from the climate crisis and that resources won’t be channeled there. I've been quite encouraged when you look at the political discourse at the country-level in a lot of countries there is this recognition of this connection between the destruction of the natural environment and the pandemic and potential future health risks.”

ON THE GLOBAL CONCERN FOR BASIC SANITATION FACILITIES DURING THE PANDEMIC

“Across all regions, climate change and environmental issues was the number one long-term global challenge that came forward. The highest percentage of respondents who chose climate change and the environment as a top threat were really in Latin America and the Caribbean, with 73% of people selecting that among their top priorities, followed by Europe and Northern America with 71% within each of those regions, and Oceania and Antarctica. When you think about where people are really bearing the brunt of a lot of environmental disasters, whether its increased hurricanes or bushfires, or rising sea-levels, it makes sense.”

ON THE CALL FOR THE UNITED NATIONS TO LEAD INTERNATIONAL COOPERATION

“In parallel to this UN75 initiative, the member states of the UN negotiated the UN75 Declaration. Overall, it is a recommitment to multilateralism, a recommitment to the UN playing a central role in addressing global challenges and international cooperation. They also included 12 commitments and they’ve asked the Secretary-General to come back at the General Assembly – this year in September – with recommendations on how the United Nations and how international actors can move forward on these specific topics, half of which are focused on global challenges and issues, the other half more focused on the UN system and processes... The Secretary-General will consider the inputs and data gathered through the UN75 initiative when he produces his recommendations. We have also made the data received across 2020 publically available through the UN75 Data Portal.”

ON VIEWING CRISES AS AN OPPORTUNITY FOR GLOBAL GROWTH

“We have seen massive regression this year, which is shocking to see the extent of it. It’s just shocking. It’s very easy to see no bright future ahead since we have to regain all of that. At the same time, we’re seeing a lot of optimism. These crises often can create opportunities if we take it as an opportunity, if political will is really invested into not just going back to where we were before, but saying how can we reset? Where do we need to reset? Whether it’s political will or resources or what’s really at the top of the policy agenda.”

ON THE INTERCONNECTEDNESS OF GLOBAL ISSUES

“No issue related to development exists on its own. Whether it’s climate change or the health pandemic that we’re seeing, the interconnectedness of all of these issues has to be recognized.”

ON THE NECESSITY FOR GLOBAL COOPERATION IN INACTING CHANGE

“If we really want to address these global challenges, then we need that international cooperation. We need to cooperate across borders, because the challenges are bigger than what any one individual country can address on its own. And beyond member states, you have to bring in the business community, you have to bring in civil society and other local actors that are really connected on the ground if you want to bring about concrete change,”