Imagine using the tools of the future to unlock the secrets of an ancient past. This is the ambitious scope of a multi-year Bass Connections project on smart archeology, under the leadership of professors Todd Berreth (NCSU), Maurizio Forte (Duke), and Michael Zavlanos (Duke - Pratt School of Engineering). The project was presented to an audience of students and community members on Wednesday, November 20, 2019, as part of the weekly Wednesdays at the Center speaker series. 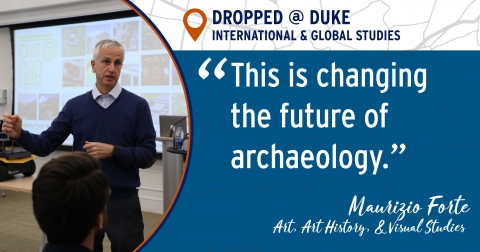 The current project (2019-2020) builds on the work that began in 2017 and is aimed digitally investigating the archeological landscape of three pre-Roman sites in central Italy: Vulci, Cerveteri and Tarquinia. All three sites include thousands of uninvestigated tombs and ancient urban structures that are now mostly hidden by crops, vegetation, and modern settlements. By studying this infrastructure, Forte noted in his introduction, "we might know how an ancient city was working."

While it would be "impossible to dig with our current budget and technology," Forte continued, Smart Archeology team members work on identifying new archeological sites, analyzing the landscape’s transformation and testing new methods and tools for capturing data and simulating and visualizing the sites. What differentiates the Smart Archeology project is its use of cutting-edge technology to document the process as well as the results. "When you dig, the documentation is your research core. The information is gone after you excavate," Forte stated.

Archeological research that uncovers ancient artifacts is of critical importance, since, as Forte observed, "There is no history able to talk - objects are the only way to deal with the history of a city."

Student representatives from the project's four research units - remote sensing and 3D archeology, robotic archeology, virtual archeology, and haptic archeology - were on hand to demonstrate their tools, techniques and findings. Audience members were invited to take a virtual reality tour of the excavation site, review analysis of the landscape's transformation, and ask questions about the robots and other smart tools used in the project.