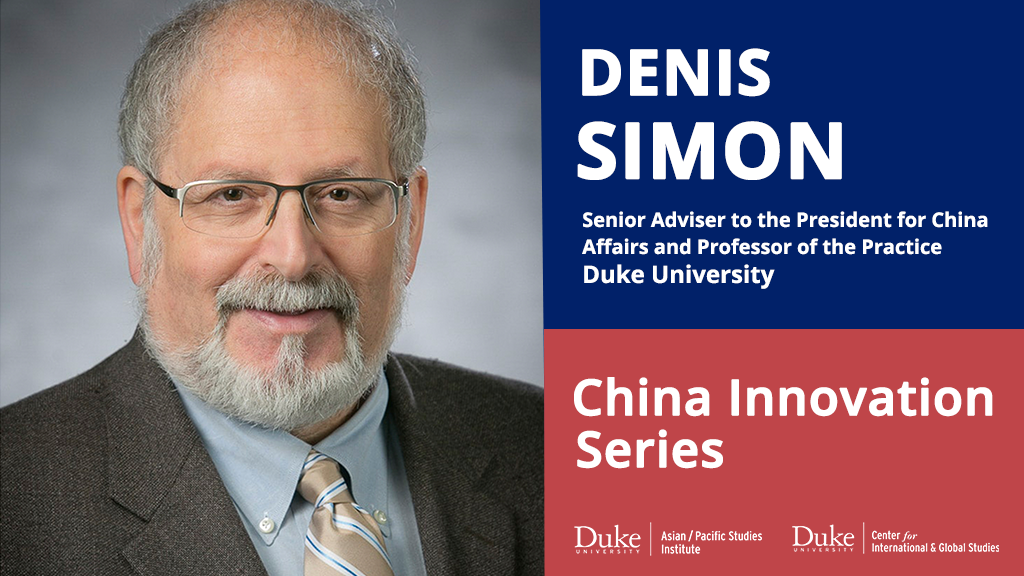 The topic of China’s progress in Science & Technology (S&T) is often surrounded—in the U.S.—by national security concerns and fears of espionage and technology thefts. But in an interview, Duke University’s Senior Adviser to the President for China Affairs, Dr. Denis Simon, argues that the openness of the U.S. research ecosystem is indeed the best tool in its hands to keep fostering innovation on advanced technologies and compete with China, a country currently producing almost twice the number of STEM graduates as the U.S.

The U.S. needs “to get beyond the hyperbole of China’s threat”, Simon said in a recent conversation with the Rethinking Diplomacy team at the Duke Center for International and Global Studies (DUCIGS).

Simon will discuss these issues over the course of the China Innovation Series, a lineup of monthly events he kicked off during the Spring 2021 and that will continue through the Spring 2022 at Duke (sign up for the next events on Tuesday, November 9: China's Search for Tech and Talent - Towards a theory of "shortage;" and December 7: How to Maintain America’s High-Tech Advantages Over China. To watch the past webinars click here.)

The webinar series is co-sponsored by the Duke Center for International and Global Studies (DUCIGS), the Duke Asian Pacific Studies Institute (APSI), and the Center for Innovation Policy at Duke Law School.

In the interview, Simon offered a brief history of China’s ascent to become a S&T world leader and summed up the lessons the U.S. can learn, including the crucial role of investments in higher education and the need to cooperate with China to tackle global challenges.

Q: China has become a major player in innovative sectors and is producing almost twice the number of STEM graduates as the U.S.

Simon: After the debacle of the Cultural Revolution in China (1966-76) and the decimation of the higher education system, the PRC leadership began to recognize the need to re-think their treatment of intellectuals, especially in terms of the role of scientists and engineers.  The percentage of high school graduates able to attend universities grew rapidly, from 3% in the early 1980s to 25% by the turn of the century and reaching over 50% by the early 21st century.  It also must be remembered that since the early 1980s, China started sending students and scholars abroad for advanced study.  While during the initial two-plus decades, many high caliber students did not return to China to resume their careers, since the onset of the global financial crisis in 2008, however, there is clear evidence that many talented individuals have decided to return home—attracted by the strong government support for advanced research and the high priority that Beijing and local provincial governments have placed on forging China into a more innovation-driven economy.

Q: What does this tell us about how to spur innovation and what are the best ways for the U.S. to increase the talent pool of science & technology experts?

Simon: The Chinese experience offers many important lessons for the US as we seek to improve innovation performance and retain our lead in a number of key S&T areas.  First, the US must invest more in all aspects of education, including K-12.  We need young people with a strong elementary and high school education to assume places in our top universities—and that involves not just more money, but also enhanced teacher training, broader deployment of technology, and building better facilities overall.

A second thing we must do is to maintain our openness to international students and scholars.  Recent national security concerns apparently have been exaggerated at the expense of attracting and retaining the best and the brightest from abroad, especially from countries in the Asia-Pacific region.  Programs such as the so-called “China Initiative” being carried out by the FBI need to be re-considered so we do not scare away high-quality applicants for our best graduate programs; we also need to ensure that we are not intimidating or humiliating unnecessarily Americans of Chinese descent who have come to this country to have a better life and contribute to the overall welfare of the United States.  By pursuing such programs with such a heavy hand, we are driving away from our campuses a substantial number of qualified students and scholars---the same types of people who in the past became leading technology entrepreneurs in Silicon Valley and top scholars in major STEM fields.

Third, we need to build more vibrant bridges between industry and universities.  Young students need to be exposed to some of the edgy things happening within US companies to better understand the excitement that comes from the successful application of new knowledge to various problems—healthcare, environment pollution, computers, automobiles, smartphones, etc.

Finally, we need to re-think the curriculum that is being offered to students, especially at the undergraduate level.  It has become clear that UG students with their fresh minds and ideas should be brought much earlier into the research environment at universities.  Research does not simply belong to graduate students, though obviously they play a critical role in the equation for new knowledge generation.  Undergraduate students with a strong exposure to the importance of research can “get the bug” and become excited about the world of science and engineering.

Q: The China Innovation Series will also focus on U.S.-China scientific partnership.  What are the national and global benefits of working together in science & technology?

Simon: Let me state from the outset that there is no S&T related global problem—climate change, clean energy, clean environment, food safety, etc—whose meaningful solution will not depend on some form of close US-China cooperation.  Whereas China once sat on the margins of international S&T affairs and was a not a very critical player in terms of science diplomacy, currently China has placed a large number of S&T diplomats in its embassies abroad, it has signed S&T cooperation agreements with over 100 countries, and it is engaged in a concerted effort to assume positions of responsibility in many of the key international S&T organizations and agencies.  In addition, China is embarked a program known as the Belt and Road Initiative involving 65+ different countries across Central, South, and Southeast Asia as well as Africa, the Middle East, and parts of Eastern Europe.  Since 2019, that initiative has shifted from a focus on the construction of big projects to an increased focus on science and technology as well as education and training as the tools for engaging with these countries.  Only recently has the US and other Western nations begun to focus serious attention on growing Chinese influence through the BRI.  One hallmark element is the “digital belt and road” that China is setting up with the BRI countries as a means to expand its technological reach, e.g. 5G technology, and establish PRC technical standards among the next generation of emerging economies.

All of this suggests that as Chinese influence in science and technology continues to expand across the globe, it inevitably is going to become a key player in the rules-making apparatus in international and regional S&T affairs.  The US and other countries, rather than simply forging a so-called anti-China alliance, need to find a better way to tap into China’s enhanced capabilities as part of a long-term collaborative consortium aimed at solving the world’s most pressing issues.