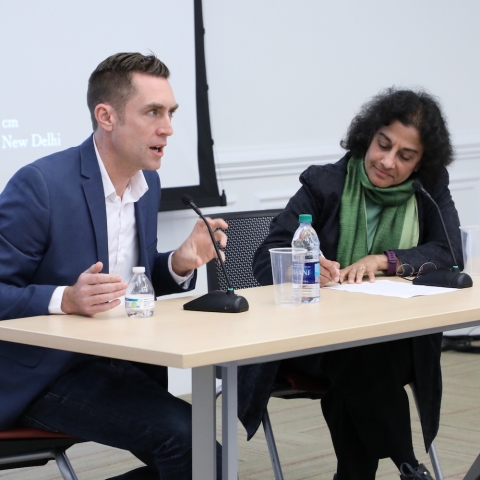 As part of the Wednesdays at the Center series, the John Hope Franklin Center for Interdisciplinary and International Studies welcomed Tim Dobe, Th.D. and Sumathi Ramaswamy, Ph.D. for a conversation on “Visualizing the Muslim Gandhi.”

The John Hope Franklin Center, Duke India Initiative, and Duke Islamic Center hosted the event, which discussed the connection of Gandhi to Islamic culture. Dr. Dobe is an Associate Professor of Religious Studies at Grinnell College and a current visiting fellow at the Duke Islamic Studies Center. Dr. Ramaswamy is a James B. Duke Professor of History and International Comparative Studies at Duke, Co-Director of Duke’s India Initiative, and President of the American Institute of Indian Studies.

Dr. Dobe discussed how there is often a focus on Gandhi’s Hinduism and western influence, but less attention on his ties to Muslim culture. In his earlier years, Gandhi was often depicted in art as “a man of the people,” and he was known to put immense effort into dressing appropriately to fit in with his surroundings. For instance, there are images of Gandhi in a suit while he was training to be a lawyer, and images of him in traditional Indian dress when he returned to India.

Furthermore, Dr. Dobe shared many works of Khwaja Hsan Nizami, who studied Gandhi and is known for his literary pieces. Nizami even predicted that Gandhi’s legacy would extent to the year 2050, when there would be a landscape of ethics and non-violence and nearly all Muslims would be vegetarian.

Dr. Ramaswamy shared artistic depictions of Gandhi later in life, when he would go without clothes and present himself nothing but a loin cloth. Artists depict this stage of Gandhi’s life in different ways—for instance, the modern Indian painter Maqbool Fida Husain did not shy away from painting Gandhi’s unclothed body. Meanwhile, Sayed Haidar Raza, who was also a modern Indian painter, rarely showed Gandhi in his paintings. Yet Raza’s work is still a reflection of his perspective on Gandhi.

As Ramaswamy explained, “there is no single way in which Muslim artists respond to Gandhi’s barely clothed body.” There was also the potential that artists were worried about allowing their faith to stand in the way of their art. However, the limitations that faith may have had on an artist’s work can be difficult to determine.