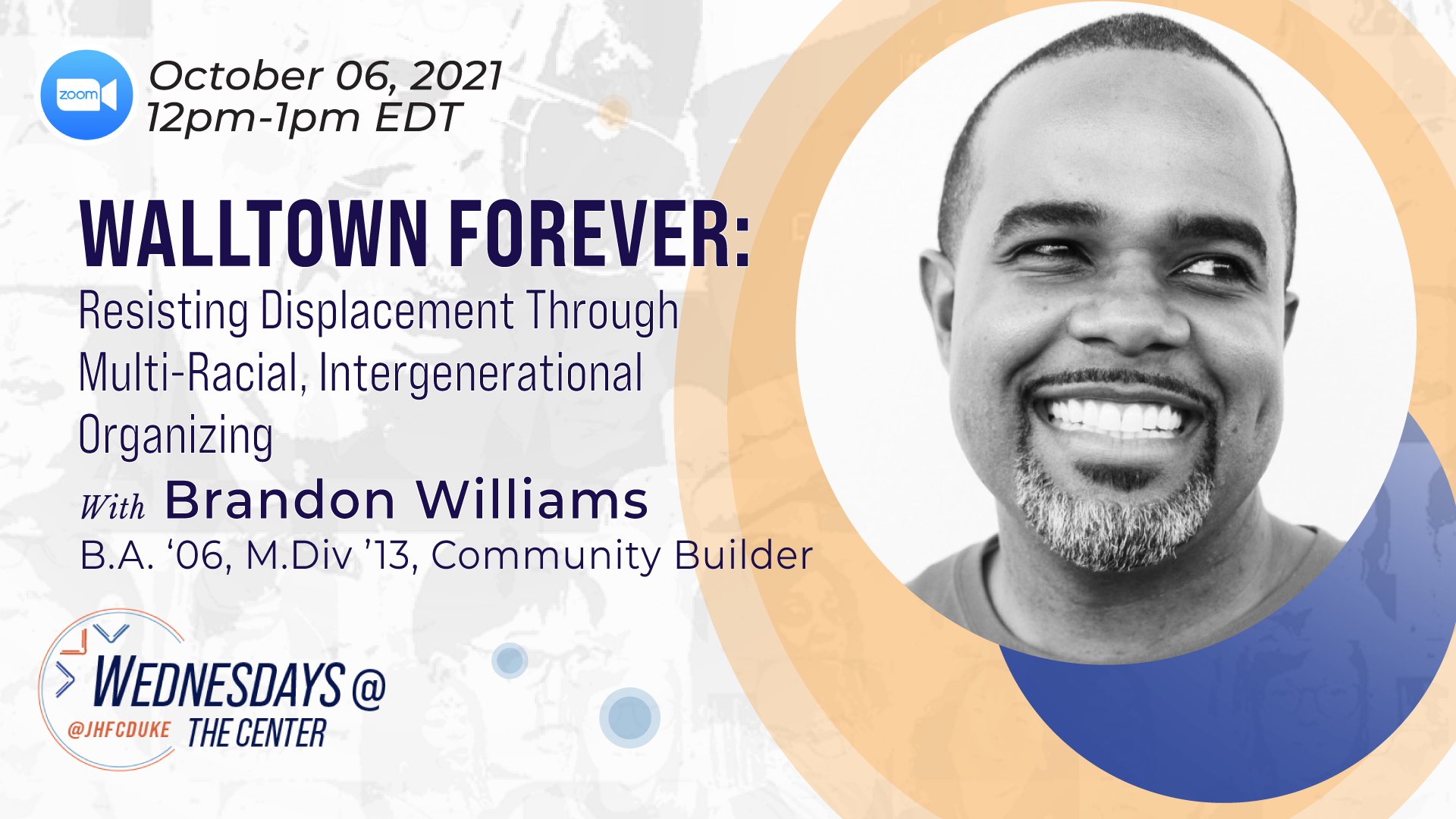 In a virtual Wednesdays at the Center event, Duke alumnus Brandon Williams (B.A. ’06, M.Div ’13) shared his community organizing work with the longstanding Walltown Community Association (WCA). Since 2018, the WCA has been organizing around the redevelopment of Northgate Mall to build and preserve the space, identity, and wealth of Walltown, a historically Black neighborhood north of Duke’s East Campus.

Walltown was founded in 1906 by George Wall, a formerly enslaved man who moved to Durham to work for Trinity College, which eventually became Duke University. Since then, the neighborhood has been home to generations of Black working-class families who, in the face of structural racism, have embodied a spirit of self-determination and resilience.

Northgate Mall, a fixture of the area since the 1960’s, had long served as a community space for Walltown. “The mall really served as a public square,” Williams said, where residents would often go to meet with their city leaders and it was not uncommon to see seniors walking the mall or meeting in the lively food court.

When the mall was sold in 2018 to developer Northwood Ravin, longtime residents of Walltown were concerned that they were going to be priced out of the area once the mall was redeveloped as a mixed-use property. Additionally, they wanted to ensure that the newly developed Northgate Mall would maintain that sense of a community space for the neighbors who have lived in that area for generations.

In response, WCA surveyed hundreds of residents, Northgate tenants, and shoppers and held three focus groups to determine what the priorities of the area’s residents are for the reimagined Northgate area. Additionally, WCA held a public design charette to develop alternative designs and maps that engaged with the community’s wishes, which prioritize affordable housing and retail, accessible green and community spaces, and environmental sustainability.

While Williams reported that the developer has yet to meaningfully engage with Walltown residents on plans for the redeveloped Northgate, Durham City Council has publicly committed to WCA to not allow any rezoning of the development without engaging with the group. This gives Walltown residents meaningful leverage, as Northwood Ravin would like rezone the area in order to increase building height capacities to put in a large hotel. With this assurance from the Durham City Council, these construction height increases will not be able to take place without public input from the community.

Moving forward, Williams believes that city and county planning departments should be required to facilitate robust community engagement practices when new developments will have a significant impact on its surrounding neighborhoods. Additionally, Williams advocates for housing policies that support, protect, and empower longtime homeowners and renters.

This event was sponsored by the John Hope Franklin Center and the Duke University Center for International and Global Studies.

For more information on the Walltown Community Association's organizing efforts: