What Can Prisoners Learn From Gandhi?

This article was published on the Duke Global website.

Leela Prasad, associate professor of religious studies at Duke, aims to see how the teachings of Gandhi might influence the lives of prisoners after incarceration. 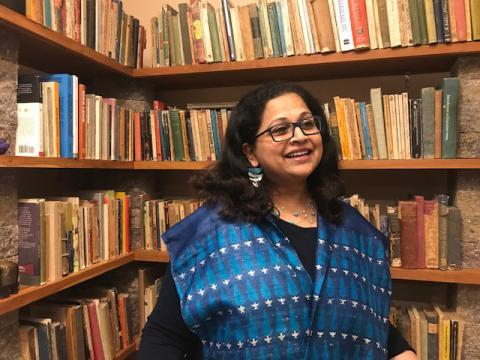 Prasad’s study examines prisoners who are exposed to writings on compassion, non-violence and freedom through a voluntary Gandhi Study Program in Maharashtra, a state in India. The program is run by a collaboration between the state government and nongovernmental organizations. The participants can also volunteer for a service project after release.

Through the work, Prasad plans to connect educational initiatives in American prisons with those in India to exchange ideas and findings about prison reform and prisoner rehabilitation.

The project, "Being Human at the Margin: Gandhian Traces After Life-in-Prison" has received support from the Duke India Initiative, Josiah Charles Trent Memorial Foundation Endowment Fund and Duke Arts & Sciences Council Committee on Faculty Research. Prasad is also a Fulbright-Nehru fellow in 2020.

An “ethnographic study” is another way to describe writing that comes out of “hanging out” with people or around places and at events (“culture”). Such writing is reflexive, which means it tells the story about something while at the same time showing the lens through which the writer is seeing things.

An ethnographic study is very attentive to context – ethnographic descriptions about culture are always situated in time and place. The process of presenting a many-sided understanding of things sometimes means acknowledging what you don’t understand, as well as learning what questions to ask or not ask, and how to ask them, to form reciprocities with the people you hang out with.

It isn’t always easy or obvious. So ethnographic research is a kind of a “critical” hanging out.

How did this idea of exposing prisoners to Gandhi’s teachings come to be? What is being taught?

Many years ago, I had taught writing to older students who were on parole, and it had been a transformative experience in my formation as a teacher. This initial experience, which viscerally connected writing to freedom in everyday acts, always lingered in my mind.

Then a couple of years ago, learning about colleagues who were teaching in the prison system in North Carolina, I was inspired to take my long-standing research interest in Gandhi to teach a graduate-level course on Gandhi’s writings in the federal prison in Butner. Struck by the resonance of Gandhi on the lives of those “on the inside,” I grew interested in learning about other efforts to bring Gandhi’s methods and ideas into prison reform or education.

The search brought me to two paths – one led to Lee Donald Stern, a conscientious objector to World War II, who had been jailed for thirty-seven months in Michigan in the 1940s, who had introduced non-violent practices and desegregation into jail life; the second path led me to the state of Maharashtra in India, which has incorporated the teaching of Gandhi into many of its prisons, including the one in which Gandhi himself was imprisoned for many years.

I’m interested in the lives of ex-prisoners who have been exposed to Gandhi’s ideas during their time in prison: how do they imagine Gandhi and what is Gandhi’s influence in their post-prison life? My initial interactions have shown that these lives are extremely constructive, engaged in social reform and directed toward generating introspection in the public sphere. But this is, of course, what I need to study ethnographically.

Where is the location of your ethnographic study?

The state of Maharashtra – in various cities and towns like Akola, Nagpur, Pune, Mumbai, for instance, where the Gandhi Study Program is administered by various nongovernmental organizations (NGOs) in collaboration with the state.

I plan to have conversations with all these actors to understand what is being taught, what aspirations drive these efforts and how ex-prisoners have reformulated their lives after returning to freedom.

What will you be looking at as the project unfolds?

I think what I will look at will depend largely on how the ethnography unfolds – I imagine that I will follow individual life-stories to see what they may tell us about how people restore themselves and others after traumatic circumstances, which they may have themselves brought about.

I’m interested in the question: What does “hope” mean and give, or how is it made, in a post-violent future? I will definitely be looking at how state policies, and non-state initiatives support or hinder self-restoration, other-healing and societal acceptance.

Although he had specific formulations, Gandhi was adamant that women participate in India’s freedom struggle because they had unique strengths, and he also had rigorous specifications of self-cultivation for everybody – for a life of activism.

I’m curious to see how projects of self-reform manifest differently for women prisoners when they are released; how do they “read” Gandhi? How do gendered norms local to their lives meet these readings? Again, much will depends on what the ethnography begins to see…

What happens once these prisoners are released?

That is what the project will discover – sometimes NGOs place them in socially-responsible companies, sometimes ex-prisoners themselves help place newly released prisoners who have undergone the Gandhi program, other times, they walk back to their families and start at ground zero and so on. I will only know when I start to “hang out!”

I start out on this project by proposing that these are terms that anchor relational states of being, deeply rooted in our material conditions at every stage. What I want to learn is whether (or how far) this is true in practice as prisoners cross the boundaries of the prison and return to supposedly “free” societies.