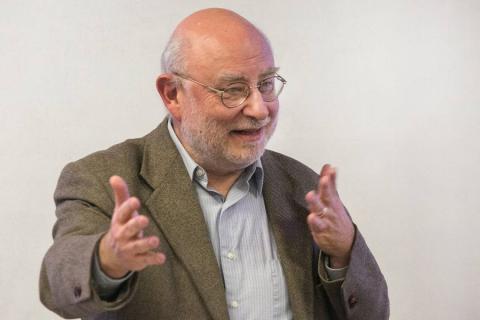 A few misconceptions about what motivates a person to become a terrorist:

-- They usually aren’t recruited. “People want to become those members; they want to be suicide bombers.”

-- “There’s no such thing as pathological hatred. That’s what we like to believe because we reduce the other guy to a stereotype. It’s really the result of group dynamics.”

-- “Political violence is the result of the political process, not deviant personality or ideology.”

These views were shared Monday by Dr. Marc Sageman, an independent scholar on terrorism whose background includes working three years supporting the Afghan Mujahedin resistance against the Soviet occupation as a case officer at the Central Intelligence Agency.

Over the past 25 years Sageman has interviewed 41 people involved in terrorism and studied 34 acts of political violence, the findings of which are in his book, "Turning to Political Violence: The Emergence of Terrorism" (University of Pennsylvania Press, 2017).

“They all had similar mechanisms,” he told a few dozen people during his hour-and-a-half talk at Gross Hall. “Throughout history the perpetrators wanted to talk. Their trials were their opportunity to tell the world about their grievances.”

Sageman, who earned an M.D. and a Ph.D. (sociology) from New York University after graduating from Harvard, said he could not share many specifics because of confidentiality agreements.

Historically, governments’ responses to terrorism – using war metaphors, making threats and using stereotypes, for example – only exacerbate the problem and lead to extreme solutions, he said.

“Grievance divides people into two contrasting sides and state intervention politicizes them,” he said. “The most militant people are seen as representative of the group. … We believe the most extremist voice of an out-group is most representative.”

“Disillusionment plus the loss of belief in self-efficacy” are at the core of why many people get involved with terrorist groups, he said.

“Countering violent terrorism is complete nonsense.” The solution, Sageman added, is vigilance to prevent the “natural social process of escalation.”

Government leaders should not escalate their rhetoric or use excessive force, but instead “engage challengers into the political arena.”

Justice, fairness and “holding police accountable for brutality through transparent procedures” are other measures that can thwart homegrown terrorists, he said.

“Isolate violent guys from other nonviolent guys, which facilitates the community’s rejection of violent members and brings them back to the fold,” Sageman said.

Sageman also was a consultant for the U.S. Secret Service, a "scholar in residence" at the New York Police Department, a special adviser to the U.S. Army Deputy Chief of Staff (Intelligence) on the "insider threat" (terrorists and spies), and a political officer for the International Security Assistance Force in Kabul.

The lecture was part of the Bass Connections project Networks of Cooperation and Conflict in the Middle East and co-sponsored by Duke's Center for International & Global Studies.

Dr. Sageman also stopped by the John Hope Franklin Center for an interview on his book, "Turning to Political Violence: The Emergence of Terrorism" (University of Pennsylvania Press, 2017), which is now available for purchase.