The Young Lords: A Radical History, by Johanna Fernández 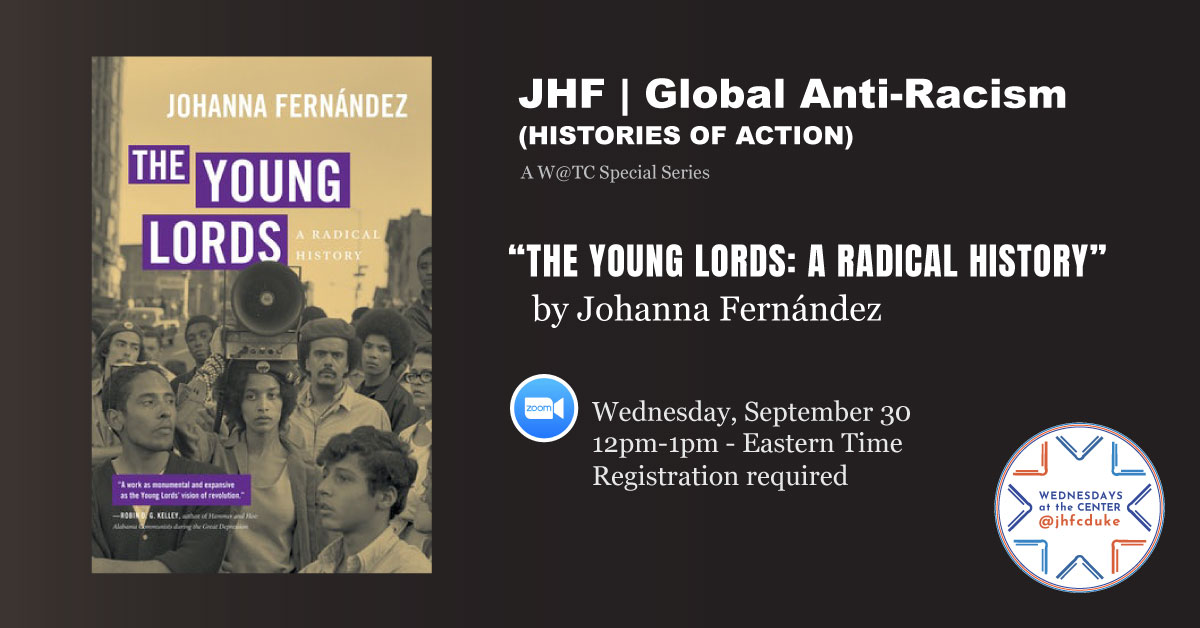 Johanna Fernández's “The Young Lords: A Radical History” is a book about a former gang of Puerto Rican youth that rose to become the Latino version of the Black Panthers. In America during the ’60s, they challenged the reputation of “bad hombres” attached to their group and joined their African-American counterparts in the struggle against white supremacy.

In this fifth installment of Wednesdays at the Center 2020-2021, we hosted author Johanna Fernández (associate professor of history at Baruch College of the City University of New York) who presented her new book published by the UNC press. The conversation was moderated by Ayanna Legros (PhD Student in History, Duke University), with opening remarks by Prof. Cecilia Márquez (Assistant Professor of History, Duke University).

“What is important about the Young Lords,” Fernández said, is that “they gave their generation the language and political analysis with which to understand the colonial character of Puerto Rico and its colonial relationship with the United States.”

In doing so, they absorbed socialism and other radical ideas of the revolutionary movements of the time. “Arguing that social problems are not local in scope but they are part of a global problem” Johanna Fernández remarked, they believed that “the same oppression that police exercise on Blacks and Puerto Ricans is connected to the struggle of the Vietnamese against colonialism. “Like the Black Panthers,” she said, “the Young Lords adopted the organizational structure, the aesthetic, and the symbols of people's armies that were fighting against colonial rule in places like Algeria Cuba and elsewhere.

The group was multiethnic, with a majority of Puerto Ricans and other Latinos. Their focus on race under Spanish rule in colonial South America is one of their distinctive contributions that has now become very popular in academia.

Fernández’s research stems from a 15-year long, hard-won attempt to access the NYPD’s surveillance files on the Young Lords. These files became accessible to the public after a New York judge mandated that over a million police surveillance records between 1954 and 1972 be registered at the municipal archive of the city of New York, as part of the Handschu case.

“The Young Lords” is not only a history of the period, Fernández concluded. “I really document how they organized and how they did it; so it is potentially a manual for how to launch grassroots campaigns and achieve an impact beyond your numbers.”

The event was organized by the Duke Center for International and Global Studies (DUCIGS), the Duke Center for Latin American and Caribbean Studies (CLACS), and the John Hope Franklin Center, as part of the 'Wednesdays at the Center' series. The Regulator Bookshop in Durham and the Forum for Scholars and Publics at Duke University co-sponsored the event.

Watch the video of the full event: