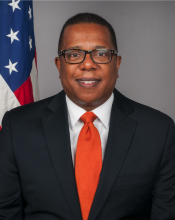 The Honorable Brian A. Nichols gave the 2018 Anthony J. Drexel Biddle, Jr. Lecture on International Studies, on Tuesday, March 27, 2018 at the Nasher Museum of Art Auditorium at 5pm. Ambassador Nichols is former US Ambassador to Peru. In addition, he was Principal Deputy Assistant Secretary of State for International Narcotics Law (INL) Enforcement Affairs, directing INL programs in Afghanistan, Pakistan, Europe, and Asia. Other international posts have included US embassies in El Salvador, Mexico, Colombia, and Indonesia, as well as oversight of programs in the Middle East, Asia and Europe. Ambassador Nichols is the recipient of the 2011 Presidential Meritorious Service Award, Six Superior Honor Awards, and multiple other Department of State awards. His talk was entitled, "For Reasons Which Are Not Immediately Clear: Foreign Policy in a Time of Uncertainty".

Mr. Nichols served as the US Ambassador to Peru from 2014 to 2017. He led an Embassy with 23 sections and agencies and over 1,000 employees. He directed a comprehensive effort to combat transnational organized crime in Peru. During his tenure, Peru broke records in coca eradication and interdiction, leading to a significant reduction in cocaine production. Ambassador Nichols pioneered strategies against illegal gold mining and illegal logging. He supported American trade and investment in Peru, including major sales to Peru’s security forces, increasing agricultural sales to over $1 billion annually, defending the rights of American investors, and building the Hemisphere’s largest public-private partnership—the US-Peru Cacao Alliance. He also pioneered programs to combat environmental degradation in the Amazon. Nichols was Principal Deputy Assistant Secretary of State for International Narcotics and Law Enforcement Affairs (INL) from 2011 to 2013. In that capacity he oversaw the full range of rule-of-law programs, counter-narcotics and multilateral issues managed by the bureau. Nichols directed INL programs in Afghanistan, Pakistan, Europe, and Asia and also led US delegations to the United Nations in various counter-narcotics and anti-crime fora.

From 2007 to 2010, he served as the Deputy Chief of Mission at the US Embassy in Colombia, where he managed day-to-day US diplomatic activities in Colombia, including overseeing over $500 million in annual US development, rule of law and security assistance. Ambassador Nichols previously served as the Director of the Office of Caribbean Affairs, coordinating US policy toward 14 Caribbean countries, including Haiti. He contributed to US efforts to re-establish democratic governance in Haiti. Nichols also served as Counselor for Political Affairs at the American Embassy in Indonesia from 2001 to 2004, where he worked to assist the Indonesian government to respond to the Bali bombing terrorist attack, strengthen its rule-of-law institutions, and consolidate its democracy. Beginning his Foreign Service career as a Consular Officer in Lima, Peru in 1989, he has also served in Mexico and El Salvador.

Ambassador Nichols earned the 2016 Charles E. Cobb, Jr. Award for Initiative and Success in Trade Development for his efforts in Peru, a 2011 Presidential Meritorious Service Award, six Superior Honor Awards, and multiple other Department of State awards. Ambassador Nichols received the Grand Cross of the Order of the Sun —the highest State distinction bestowed by Peru in 2017. A native of Rhode Island, he is a graduate of Tufts University.