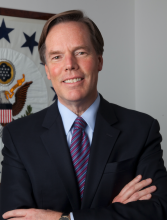 2021 Biddle Lecture Description:
We are confronting the most serious crises since the Second World War: a deadly pandemic, devastating recessions, racial inequality, and white supremacy and insurrection here in the United States. We need to repair our divisions at home. We also need to re-engage with the rest of the world on multiple fronts from climate change to trade and the defense of democracy.

Ambassador Nicholas Burns has spent four decades representing the United States overseas and teaching about America's role as the indispensable power in the international arena. For much of that time, the nation leaned heavily on its unmatched military might-during the Cold War, after 9/11, and in the Afghan and Iraq wars. We have new challenges today. It is time for diplomacy to play the key role in reconstructing a more stable and better world.

The Anthony J. Drexel Biddle, Jr. Lecture on International Studies was established by Mary Duke Biddle Trent Semans and James H. Semans and their family to honor Mrs. Semans' father, who had a distinguished career as a diplomat in the service of the United States and was an original signer of The Duke Endowment. This lecture series symbolizes Duke University's continuing commitment to promoting international understanding and public service.

Speaker Biography:
Ambassador Nicholas Burns is the Goodman Professor of the Practice of Diplomacy and International Relations at Harvard Kennedy School. He is Faculty Chair of the Future of Diplomacy Project and also of the Project on Europe and the Transatlantic Relationship at the Kennedy School’s Belfer Center for Science and International Affairs. Burns is Executive Director of the Aspen Strategy Group and the Aspen Security Forum; he is Senior Counselor at The Cohen Group. He is Chairman of the Board of Our Generation Speaks, which seeks to bring together young Palestinians and Israelis in common purpose. Burns served in the United States government for 27 years as a career Foreign Service Officer. He was Under Secretary of State for Political Affairs (2005-2008), U.S. Ambassador to NATO (2001-2005), U.S. Ambassador to Greece (1997-2001), and State Department Spokesperson (1995-1997).

Read the Duke Today article about the 2021 Biddle Lecture.