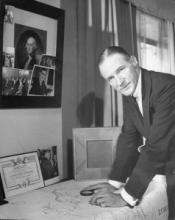 Although Ambassador Biddle had a varied career—including work in shipping, mining and even the sporting world—he found his greatest calling as a diplomat. Born in Philadelphia, he attended the Saint Paul’s School in New Hampshire and later, Temple University. Serving in the US Army during World War I, Biddle rose in rank from Private to Captain. After the war, he engaged in various sports in a serious manner, becoming “Court Tennis” champion of France. In addition, he was a good prizefighter, following in his father’s footsteps. His father was a jiu jitsu expert in the US Marines and the trainer of champion boxer Gene Tunney. The younger Biddle then embarked on various business ventures before becoming involved in politics in the early 1930s. President Franklin Delano Roosevelt rewarded Biddle’s work by naming him to his first diplomatic posting in 1934, as Envoy Extraordinary and Minister Plenipotentiary to Norway.

An appointment as Ambassador to Poland followed in 1937, as World War II loomed over Europe. Staying a step ahead of the invading German armed forces, Biddle ended up in Paris, where he served as Deputy Ambassador to France.

In 1941 Biddle was named US Ambassador to Belgium, Czechoslovakia, Greece, Luxembourg, The Netherlands, Norway, Poland, and Yugoslavia, whose governments were in exile in London. At the time, this extraordinary posting was termed the biggest and, in some ways, the most important diplomatic mission ever handled by a single envoy.

Biddle retired from the diplomatic corps in 1944 to return to active duty in the US Army as a Lieutenant Colonel, rising to the rank of Brigadier General in 1951. During those years, he worked closely with General Dwight D. Eisenhower, as Deputy Chief of Supreme Headquarters Allied Expeditionary Force (SHAEF) and as a representative to US European Command (EUCOM) and Supreme Headquarters Allied Powers Europe (SHAPE), NATO’s central military command.

The 1950s found Biddle serving as Adjutant General of the State of Pennsylvania, on numerous Pennsylvania state boards and commissions and as a trustee at Temple University. In 1961 President John F. Kennedy chose Biddle for his final diplomatic position, that of Ambassador to Spain, where he served until shortly before his death.